Picture this. It’s VEISHEA week in 1935. You’re chillin’ at Lake LaVerne, and suddenly a wild swan float appears! Filled with flowers and maidens, it appears out of smoke and floats across the water. Then it releases four swans!

This is the story of our resident lovebirds, Lancelot and Elaine. While these swans are not the original swans released on the lake, they have been a beloved tradition of Iowa State ever since their arrival in the early 20th century.

Lake LaVerne is home to the beloved Lancelot and Elaine. Lake LaVerne was built in 1910 and funded by LaVerne W. Noyes with the intention of making his alma mater more beautiful. Read more about Lake LaVerne here.

There have been several Lancelot and Elaine’s throughout the history of Iowa State, and usually they have been mute swans. There was a pair of trumpeter swans from 1995-1999. However the trumpeter swans proved to wander too much, and could sometimes be aggressive. There were reports of them wandering as far as Parks Library! They were later returned their natural habitat. Today Lancelot and Elaine are mute swans, and were added in 2003.

Mute swans can live up to 20 years in the wild, and even up to 40 years in captivity. Swans will generally mate for life, however this is not necessarily true for mute swans. Mute swans have been known to have up to four mates and will even pick and choose which ones to mate with. Normally the Lancelot and Elaine have been male/female pairings. There were even cygnets (baby swans) born in 1944, 1970, and 1971. Today though, Lancelot and Elaine are both female. This is to help maintain the swan population in Iowa.

What are your plans for Valentine’s Day? Do you have a special date with your lovebird? Or do you have a long night of Netflix planned? If you can brave the cold, then you may be interested in the Lake LaVerne tradition! Legend says that if you walk with your love, in silence, three times around the lake, then you are truly destined to be together.

Either way, I’m talon you to beak-areful and have a pheasant day! Make sure to croon your lovebird, don’t be hawkward, and try not to ruffle any feathers. Stay coo-l, even if you’re owl by yourself! I hope these bird puns are emusing and aren’t flying over your head. Personally they’re quacking me up. I’ll sparrow you all the rest that I have. They’re pretty fowl. 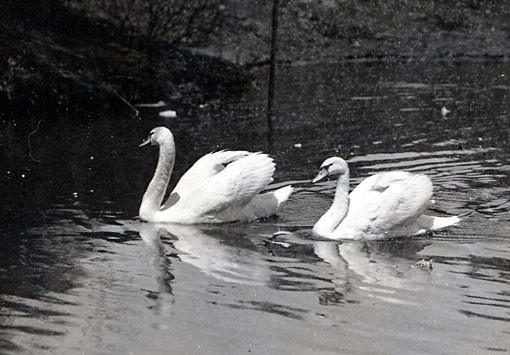 Why Homecoming is Amazing Here at Iowa State
Haley Beckner

DAY IN THE LIFE

10 Things I am Thankful for: Iowa State Edition
Kacey Konrad